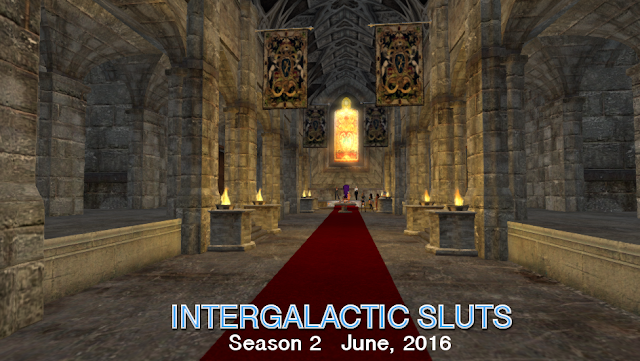 Many of you may not know I make and sell clothing in SL. But if you don't my advertising on the sides of the 2 blogs isn't working very well!!!

The budget for 1 season of Intergalactic SLUTS is L$450,000!! All of that is paid for by Porn*Star Fashions, without the store there is no series, not this big anyway. So when season 1 wrapped we went on a 1 month hiatus with plans to have 4 webisodes ready before webisode 1 was released the first week of April!!

During my 1 month I had planned to work on my store and clothing line to ramp up business so I could coast through the second season of IGS with minimal attention to my store (worked for season 1). But as I added cast for season 2 and their wardrobes I initially reached out to Graves and proposed they sponsor the series and parties. I received no response!!! Maybe she didn't see my NC, maybe it got lost in her busy life, maybe she hated the idea and didn't feel it was even worth a response, I don't know!

So I looked elsewhere for costumes and came to the conclusion I could make them myself and sell them in my store, a double positive!! So season 2 production came to a halt, after all I had to clothe many of these people before I could shoot them wearing them. My expectations are to finish up with clothing before the end of this month and get back to full Series production on or before May 1st.

I have already shot webisode's 1, 3 and a scene in 4, just have to edit and do the special effects for them. So if you are in the series and wondering: "What is going on? have I been killed off?" or already shot scenes and wondering why it's taking so long to be released, this is your update!!!
Posted by Miss Emily at 10:00 AM