Epic Movie Back for Halloween:

An Indie rock band wants to make it big; they think the only way to do that is to get in with Satan. They come to this small town to sacrifice a virgin in his name, but Jennifer is not a virgin, instead it unleashes a sex crazed “Fuck you to death” demon that needs to feed. 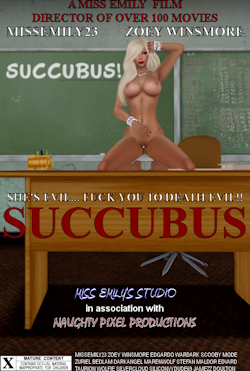 Spent 6 1/2 weeks filming this and 8 weeks editing. Several of the stars of this I had never meet before the casting call and were virtually unknowns.
The sex scenes were the easiest to shoot .The non sex scenes took some times 1 hour  for 1 minute in the final film cut, those parts I would call actual acting not pose ball riding and were the most rewarding parts of the movie.
Posted by Miss Emily at 10:00 AM