Admiral Emily, Captian Miggins and Lieutenant Severina decide the Intergalactic SLUTS should return to Sheschlong for the Queen's coronation.
We see what goes on in the Queen's transport back to Sheschlong.
One-eyed Larry and Damien escape again.
Heather gets crowned; Queen of Sheschlong. 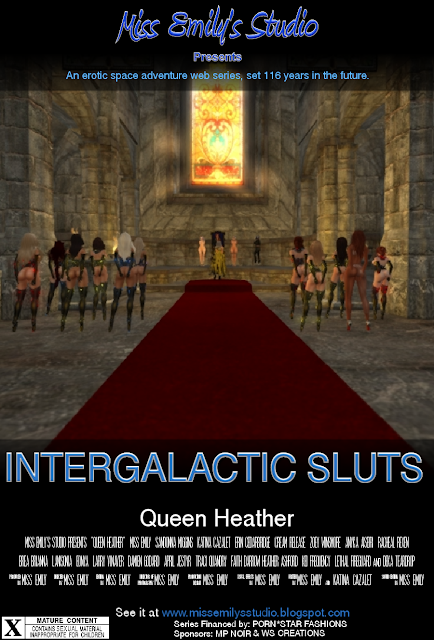 
If the video doesn't play right for you here it can also be seen by using these links:

This webisode was planned in 2016 to be the 10th and final episode of season 2. Things happened, I was in rehab for 2 months and felt really out of film making when I got out so I finished 2017 with 13 simpler films. When we started season 3 I felt this and "Death To The Royals" were needed to put sort of a cap on season 2 story lines.

The next webisode is named "New Start" which is exactly what it sounds like. Everyone is back  aboard the Intergalactic SLUTS and we are back to exploring. It might sound boring, but it's not, we are unbound of the story lines of Mistress De Vil and the Slavers and are free to explore new planets, for a while.

I hope you enjoyed this movie, we enjoyed making it!! If you would, Please leave a nice comment below!
Thank you.
Posted by Miss Emily at 11:55 PM