Admiral Emily and the crew of the Zeus on planet Solitudinem catch One-eyed Larry and Slaver Damien off guard, they surrender with no resistant. Admiral Emily spares their lives but still hands out a punishment worse than death. On the Intergalactic SLUTS, Lieutenant Release isn't feeling well and Dr. Winsmore makes her feel better. 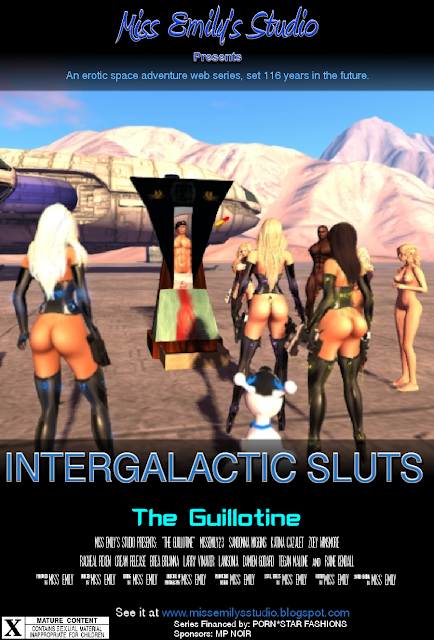 If the video doesn't play right for you here it can also be seen by using these links:

I hope you enjoyed this webisode, we enjoyed making it!! If you would, Please leave a nice comment below!
Thank you.


Production Notes: The Guillotine scene with Larry and Damien was originally filmed on March 8, 2019. That was after I reinstalled Fraps and I hadn't noticed the cursor wasn't hidden, so on March 28, 2019 we refilmed that entire scene. Damien and Larry had to endure the guillotine twice.

Also filmed with the cursor showing was Zoey and Creams scene, March 9, 2019 which was rescheduled  more than a dozen times and finally shot 3 months later on June 8, 2019.